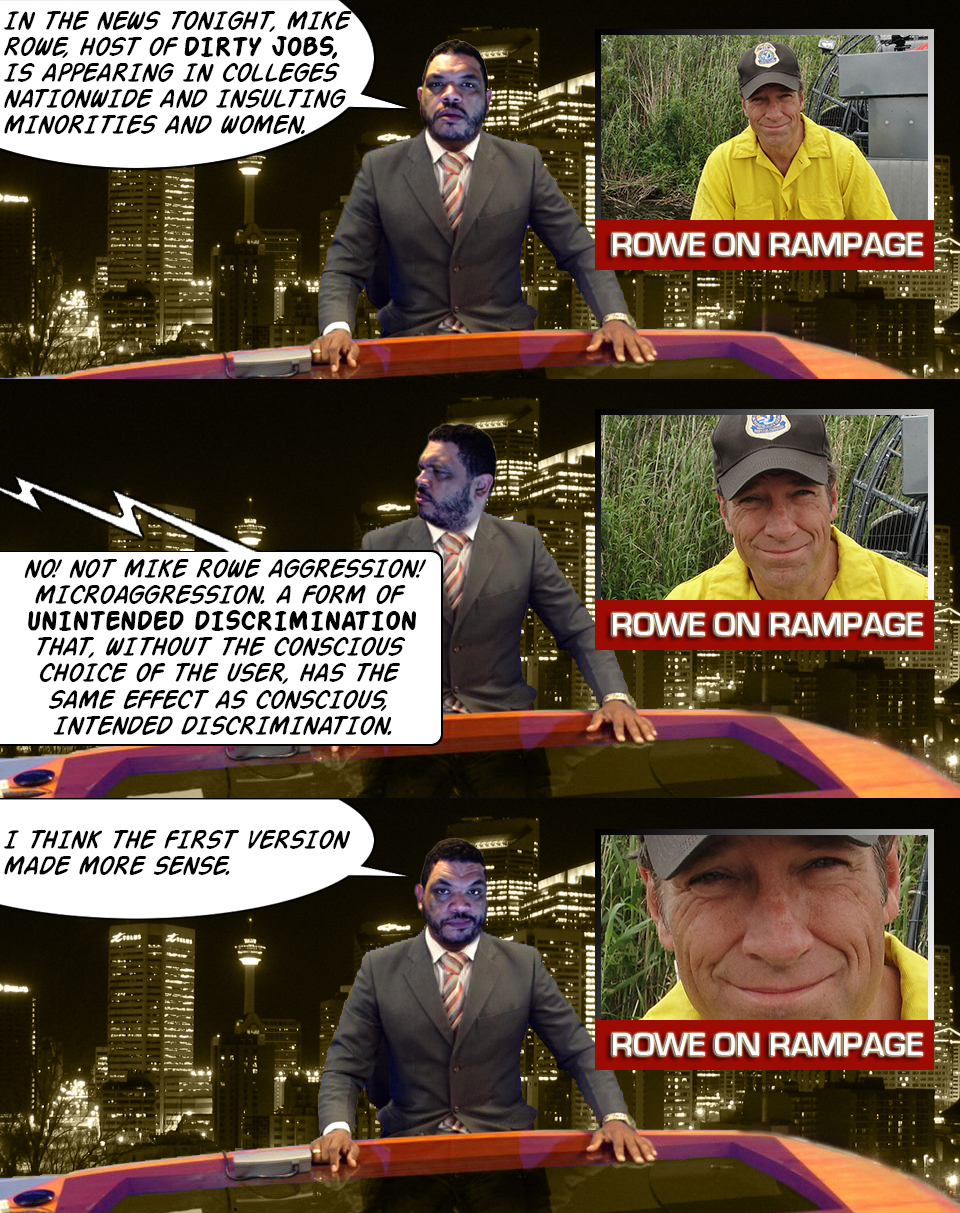 I was running up against a deadline for posting this. I finally just decided to post as is, with the editor’s notes still attached.

In the last couple of weeks, I’ve taken on such hot-button topics as abortion and the #BlackLivesMatter movement, so this week, I decided to take on something a little less controversial: microaggression.

Although the word microaggression has been around since the 1970s, it has only begun flourishing in the last few years. In our postmodern society, where political correctness is (Ed. note: This is an offensive patriarchal depiction.), people have found a way to take offense at . (Ed. note: This is offensive to pacifists, as a drop of a hat was once used to signify the start of a fight.) To offend, you no longer have to actually possess the intention of disparaging another person due to race, gender, sexuality, etc. You can now be offensive without even trying. Literally.

It used to be that people took offense to things that were rightly intended to offend. Someone would insult another, fully intending to cause injury with those words. The offended person would then make the conscious decision to either slug the offender, return the insult, or walk away and have nothing more to do with the . (Ed. note: This is offensive. Use knowledge differently-abled.)

Then political correctness came along. Suddenly, a whole new language was created so that no one would be able to offend. You were no longer just an American. You were African-American, Asian-American, or Caucasian-American. Terms like “differently-abled” were born. Every word had to be (Ed. note: Terms like this are representative of the oppressive white majority.) by the “sensitivity brigade” and help the (Ed. note: This is offensive to those who don’t believe in heaven or that we have souls. And to people with no money.) who dared to use any terms not approved by the PC . (Ed. note: This is offensive to anarchists.)

And now we have microaggression, where anything and everything can and does offend. Compliment a (Ed. note: This is an ageist term. You should use the term pre-womyn.) on doing well on her math test because you’re genuinely proud of her, and she has the right to be offended because you’re a misogynist who believes that women aren’t capable of doing well in math. Ask a (Ed. note: Change this to Hispanic-American.) man where he works out of genuine curiosity, and he has the right to be offended because you automatically assume he’s an (Ed. note: This is offensive. Use undocumented guest worker.) who’s on . (Ed. note: This is offensive. The proper term is “transitional living fund.”). Ask a gay man if he has a girlfriend because you were making small talk and didn’t even realize he was gay, and he has the right to be offended because you’re obviously a homophobe. You see, it’s no longer about what you’re saying, but what the other person decides you mean by what you are saying.

Calling out microaggressions is especially popular among people who like to see themselves as victims, because this gives them the “proof” they need to show that they’re right, that we haven’t progressed at all in the fight for civil rights. These people (Ed. note: you can’t say “these people.” You’re setting the group apart by singling them out, which could make them uncomfortable.) believe society is just one step away from putting blacks back in chains and women back in the kitchen. To those who want to be victims I say, in the words of Bob Newhart’s character, Dr. Switzer, STOP IT. Get off your . (Ed. note: This is offensive to ponies. And Li’l Sebastian.)

No one is trying to take away your rights. But if you feel a little uncomfortable because someone asks you if you can teach them to cuss in Spanish, here’s an idea. Instead of anonymously posting it passive-aggressively on some macro microaggression-agglomeration website, why not talk to the person who made the comment and describe how it made you feel. Nine times out of ten, the other person will be sincerely apologetic and will have had no idea that the comment may have been inappropriate. (With the tenth person, you can go back to the way things used to be handled and either slug the offender, return the insult, or walk away and have nothing more to do with the . (Ed. note: Knowledge differently-abled. See above.) Nothing will change if these conversations on race and gender don’t take place.

Speaking out against the ridiculousness of microaggression, though, can get you into trouble. Omar Mahmood, a student at the University of Michigan, wrote a satirical piece which took microaggression to an absurd degree. When it was published, to no one’s surprise, some people were offended. (Ed. note: this is offensive to nonreaders.) who were offended retaliated in full-on macroaggression, otherwise known as aggression. They called him names, left him hateful notes, and even egged his door. He had to quit his job at The Michigan Review and write an apology letter to the editorial staff at the school paper, which he also worked at, for creating a “hostile environment.” All of this because he wrote a satirical piece about people being offended by ridiculous things. This is what is commonly known as irony. And those who claimed to be offended didn’t even have the (Ed. note: This is offensive. It implies only men can have courage.) to face Mahmood directly and speak to him about the supposed offense. The offended (Ed. note: This is offensive to people who don’t like to celebrate.) faced a supposed microaggressive act with macro passive aggression.

There will always be people who’ll say stupid things, intentionally or unintentionally. I had a white friend who called me “Blackman” — the African-American version of Batman (I’m a biracial Hispanic, by the way.) — and he called himself “Commissioner Whitebread.” I could have been offended by his insensitive remarks. I could have played the victim card. But I didn’t. Because I knew he was not being deliberately malicious or hurtful. The majority of people in this country do not set out to intentionally hurt others with their words or actions, so let’s stop acting like everyone is out to get everyone else. There’s enough in this world to get indignant about without having to find issues where there are none. Let’s all . (Ed. note: This is offensive to moles, belittling their work.)